Verifiably ready to go - for the energy of the future

The Angst+Pfister Group has tested in-depth the suitability of its elastomers for hydrogen applications – which has also provided answers to the increasing number of customer inquiries about this future technology. The investigations are yielding more and more knowledge beneficial to customers about seals in the hydrogen environment. The findings have already been successfully implemented in practice.

has tested in-depth the suitability of its elastomers for hydrogen applications – which has also provided answers to the increasing number of customer inquiries about this future technology. The investigations are yielding more and more knowledge beneficial to customers about seals in the hydrogen environment. The findings have already been successfully implemented in practice.

Back to Industry Stories

Hydrogen is the smallest, lightest, and most common material in our universe. However, it rarely exists in pure form. It is usually chemically bonded to oxygen in water or carbon in the hydrocarbons of fossil fuels. As a source and carrier of energy, it has multiple benefits and is also the subject of considerable discussion.

Green hydrogen production does not produce CO2. It can be generated from renewable sources. However, the costs are still relatively high. But in the next few years, the costs will be driven down by more investment in related technologies. Hydrogen has the potential for a very bright future; it could decarbonize heavy industry. It can be stored safely for a long time. It can be used in fuel-cell electric vehicles. In addition, hydrogen contributes to the security of the energy supply by diversifying fuels mix.

From grey to blue to green

Today, there are three main production methods for hydrogen.

Green hydrogen is not yet in wide use. The production of grey hydrogen is by far the most common, as it is the cheapest. About 95 percent of hydrogen is currently produced by this method. A few technical problems still need to be solved for the broad-scale use of green hydrogen, and more research is required. Trends and investments are increasingly pointing towards CO2-neutral production processes.

Hydrogen is suited for many markets and applications. It shows promise as a heat source for homes and businesses as well as for heavy industry. Hydrogen can be used as a transport fuel or to produce electricity. In addition, it is an important raw material in many industries, such as refineries or the chemical industry.

Elastomer seals are needed wherever hydrogen is produced, transported, or stored. The requirements for these seals are very challenging. They have to function in a wide temperature range. They also have to be able to handle high pressure. Permeability is key, so the rubber compounds have to withstand hydrogen. The Angst+Pfister Group is currently running extensive suitability tests on all its existing products and new developments for use in hydrogen applications. 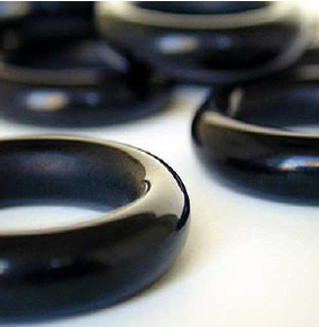 Whenever there are gases, the permeability of seals is always of particular concern. The structure of the elastomers functions as a barrier in the transportation of gases. Nonetheless, gases can still slowly diffuse through the polymer scaffold. Two thermodynamic properties come into play here:

The product of these two factors is permeability. This, in turn, depends on a range of factors such as temperature and pressure, or the thickness and surface area of the material in contact with the gas. With gases, both the size of the molecules and their interaction with the seal material matter. Small molecules such as hydrogen diffuse more easily.

Angst+Pfister recently tested its portfolio with regard to hydrogen applications. The focus was on FKM, EPDM, and HNBR. Based on the market inquiries to date, the tests started with materials with a Shore A hardness of 90, accounting for applications where pressure can be high. The Angst+Pfister engineers devised three different tests:

We found that the solubility of hydrogen is low (in contrast to CO2, which can penetrate elastomers in large quantities and thus cause problems such as rapid gas decompression issues), whereas diffusion is relatively high. To recall: permeation is the product of the diffusion and the solubility coefficients. Therefore, it can also generally be said that permeation is relatively low. Hydrogen can move into material easily but does not stay put. The tests confirmed our theoretical expectations. The type of polymer and the rubber compound affect permeation. Permeation tests allow us to rank our in-house materials for suitability to hydrogen applications. Angst+Pfister can provide detailed data to interested customers.

Permeation as the main reason for leakage

Leakage testing was conducted under conditions identical to those of the permeation tests. The geometry of the O-rings also affects leakage. In principle, results of the leakage test showed the same ranking within materials that was found for permeation, thus suggesting that permeation (or natural leakage) is the main reason for leakage. That is, it was not due to surface leakage.

One of the best-performing materials (FKM1) was submitted to RDG test. Our FKM 1 received the best possible rating (0000) from the Norsok standard, which has deep origins in the oil and gas industries. The tests suggest that this material, which has already shown itself to be decompression resistant with other gases (methane and CO2), also works with hydrogen and that, possibly, hydrogen will cause limited rapid gas decompression issues.

Permeation seems to be the main factor influencing the functioning of seals in hydrogen applications. Materials that have proven to be decompression resistant to other gases may not have problems with hydrogen, but this needs to be proven. Therefore Angst+Pfister is now planning further tests with pure hydrogen and pressures above 150 Bar. Likewise, Angst+Pfister compounds with a Shore hardness of 70 will be tested for permeation and leakage to be possibly used for moderate pressure applications. At the same time, Angst+Pfister is currently working on projects with customers to develop new sealing solutions for hydrogen applications.